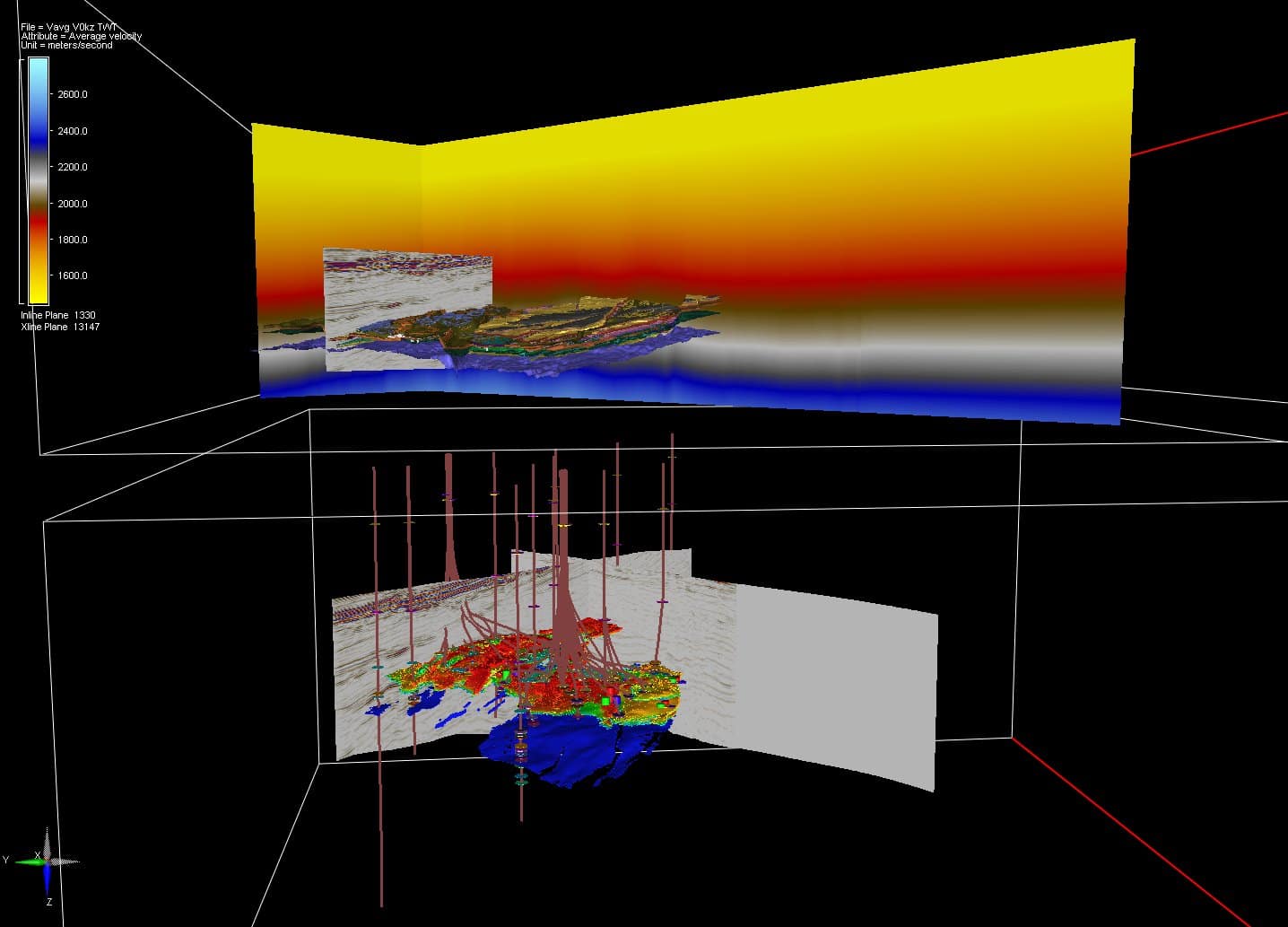 Depth uncertainty is a major issue for geologists and geophysicists in reservoir development planning. The well to seismic tie is important for achieving accuracy in the depth conversion data as well as for characterization of the subsurface and reduction of geological uncertainty. However, the variation in rock properties can affect the conversion process and the ultimate analysis derived from the well tie.

Uncertainty can be reduced with the ability to visualize and make a comparative analysis of 3D seismic attributes and well data in a single platform. Accurate depth conversion of 3D seismic data can be achieved with a comprehensive 3D depth and velocity model. Data visualization and integration software can facilitate this correlation analysis, allowing asset teams to make an economic decision in well planning and development.

In the development of reservoirs and well planning, the understanding of the geologic structure is the most important aspect. The 3D seismic volume provides a detailed reflection of subsurface geology in the oil and gas field. However, for engineers to make decisions regarding the drilling of wells, the time domain of the seismic data requires precise conversion to the depth domain.

Accurate depth conversion is crucial to ensure there is no miscalculation when estimating the drilling depth to reach fluids. But the conversion process can be complex. Even a subtle variation in subsurface rock properties can cause miss-ties between seismic depth converted data and well log data. For instance, a gas-charged reservoir significantly alters the velocity of the rock such that reserve calculations are off by millions of dollars.  Also, drilling a new well into that reservoir could encounter the top at an unexpected depth leading to long downtime at significant expense. Inaccuracy such as this can be economically burdensome for the project. To eliminate such errors and variation in seismic depth data, a correlation between 3D visualization of depth conversion and well data can prove to be advantageous.

Time and depth data visualization and integration software platforms allow geologists, geophysicists, and reservoir engineers to perform time-to-depth conversion by creating an effective velocity model incorporating the various geological and petrophysical data and interpretations. The most effective software has layer-by-layer, as well as fault block-by-fault block, modelling capabilities which allow efficient calculation of the residual difference between seismic depth conversion and well tops.

These features allow asset teams to get a comprehensive view of the subsurface and enable them to spot the variations and inaccuracies in the depth conversion of 3D seismic data—which is crucial in minimizing the development and production uncertainties.

The Value of Temporal Data Analysis in Reservoir Management

A fully integrated 4D solution requires all temporal data to be assimilated into a single system with access to both individual files and all data simultaneously, regardless of time steps. Sophisticated handling of the data enables the addition or exclusion of...
Read More

A Statistical Approach to Depth Uncertainty Analysis for Model Integrity

Potential Infill well plans showing different sidetrack opportunities while targeting bypassed oil in an onshore oil field. Data courtesy of RMOTC and US DOE.The economic and engineering risk associated with the development of hydrocarbon assets is immense. In...
Read More

Reservoir Surveillance: Understanding the Role of Data Integration in a PRM Environment