A Statistical Approach to Depth Uncertainty Analysis for Model Integrity 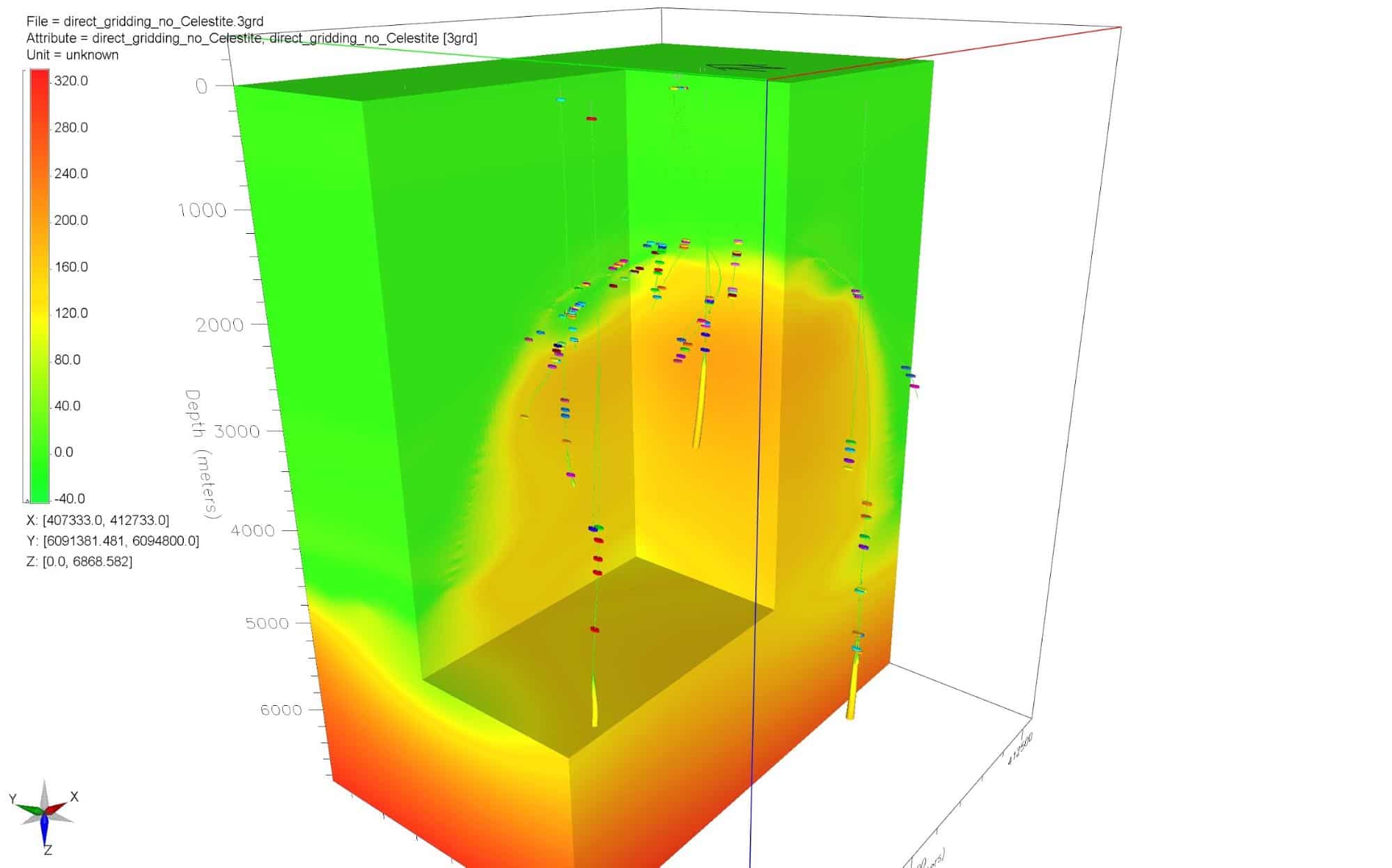 Dealing with the fundamental uncertainty of subsurface environments and their hydrocarbon resources is one of the major industry challenges. Seismic and borehole technologies improve our ability to acquire greater volumes of geologic information. Ever-increasing processor power crunches these data more efficiently to create models to help geoscientists and reservoir engineers understand the interaction between geology and hydrocarbon resources. However, regardless of the volume of data acquired, depth uncertainty analysis regarding horizons, faults, strata, and other subsurface formations continues to be a challenge.

Knowing accurate depths is critically important. It affects anything and everything regarding well planning, drilling, and production. If an oil-bearing layer was estimated to be 7,000 feet deep in very soft rock and it turned out to be 1,000 feet deeper with various hard layers to drill the result of the inaccurate estimation could be huge cost overruns due to extra rig time, drill pipe, and expensive drill bits.
Depth uncertainty analysis is critical to minimizing the risk of costly planning and drilling mistakes throughout every phase of reservoir development.

CoViz 4D makes it possible for geoscientists and reservoir engineers to integrate, analyze, and visualize a wide variety of subsurface datasets, regardless of the original source, to better understand how development decisions affect reservoir performance.
One of its many capabilities is the standard velocity modeling module that calibrates existing velocity models to minimize the depth residual (error) at the wells. This results in a more accurate velocity model that can be used to transform seismic data into the depth domain. A byproduct of the process is a depth uncertainty model. Depth predictions from this model can minimize the risks of drilling wells in previously undrilled regions. Customizable workflows enable an efficient modeling process and allow for rapid updates as additional well data are acquired during the course of field development.

CoViz 4D achieves a better level of depth uncertainty analysis by first calculating a scalar value from well pick residuals. It then applies this scalar value to the interval velocity layer by layer to produce a corrected velocity model. The interval and average velocities are continually refined as the process iterates from the top to the bottom of the structural stack. The result is an average velocity volume that can convert time surfaces to depth with reduced residuals at the wells. 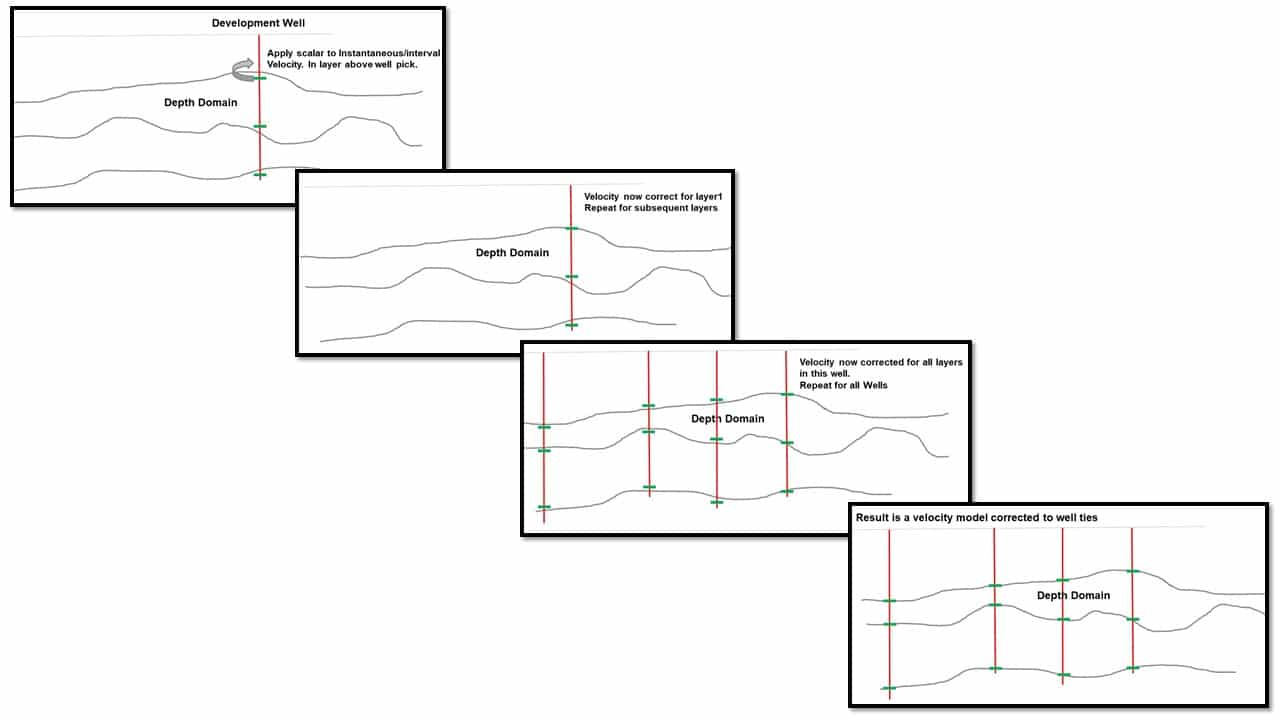 CoViz 4D takes the residual results calculated by the velocity model and computes a depth uncertainty model. In the process information regarding residuals and timing/velocity errors are displayed allowing the user to make adjustments as needed. The resulting output is a 3D model of depth uncertainty that can be visualized to explore various depth uncertainty scenarios.
As additional wells are drilled, data from these wells can be incorporated to improve the depth uncertainty analysis. Rock layer depth markers obtained from well logs help correlate and correct the depth uncertainty derived from uncalibrated velocity models. Velocity and depth conversion accuracy continue to improve as more wells are drilled and models are recalculated. Customizable workflows make it easy to automatically run (and re-run) these calculations, changing parameters to evaluate various scenarios, and continually refine the models.

Customizable workflows make it easy to automatically run (and re-run) these calculations, changing parameters to evaluate various scenarios, and continually refine the models.

From LiDAR Data to 3D Model: Fast and Easy Visualization of LiDAR Datasets

In this LiDAR dataset of nearly one billion points, the Canadian city of Ottawa is presented in impressive detail, but can easily be manipulated and interrogated on even a laptop computer using CoViz 4D softwareGeothermal oil and gas, mining, and construction...
Read More

The above image in CoViz 4D depicts a seismic horizon and velocity model in the time domain (top) and the same horizon, depth converted, along with the depth converted seismic cube, wellbores and horizon picks in the depth domain (bottom). Data used with the...
Read More

Completions in HPHT environments are challenging and costly. 3D visualization and analysis of reservoir conditions and characteristics, along with offset well data, can significantly increase safety and success rates. Data used with permission by the...
Read More

4D seismic together with reservoir simulation results are a powerful tool in optimizing production over the life of an oilfield.Engineers and geoscientists know more than anyone about the challenges associated with complex reservoir characterization, especially in...
Read More

Data acquired during drilling, in conjunction with reservoir models and seismic interpretations, can greatly improve the understanding of evolving reservoir characteristics and conditions when integrated with CoViz 4D.Borehole data obtained during a drilling process...
Read More

Well-to-well communication—often found as frac hits during hydraulic fracturing—is common in unconventional oil and gas development. When the fracture network of a newly drilled well connects to an older well’s fracture network, the older well may fill with sand and...
Read More