Understanding the Role of Data Integration in Enhanced Oil Recovery

EOR operations are complex, as depicted in this photo of a steam injection operation. Communication between team members and other teams is critical to understanding and managing EOR activities. CoViz 4D provides a highly integrated environment for data sharing and improved decision-making.

Primary and secondary oil recovery methods can leave as much as opens in a new window75% of the oil in the ground. For many long-established wells such as those in California, Oklahoma, Texas, and Mexico where much of the easy-to-produce oil has already been extracted, tertiary or enhanced oil recovery (EOR)—although expensive in comparison to primary and secondary recovery—is the only option to reach the remaining oil.

Regardless of the enhanced oil recovery method used—steam, chemical, or gas—the ability to monitor the effectiveness of the process is critical in maximizing recovery and minimizing costs. When reservoir teams have access to relevant data associated with opens in a new windowreservoir characteristics and performance, they stand a much better chance of planning, implementing, and monitoring enhanced oil recovery activities.

A Tale of Two Wells

Each well was modeled separately, and initially, each team had only their well data to evaluate when attempting to identify the reason for the problem or anomaly. However, with the aid of opens in a new windowCoViz 4D, software that integrates and visualizes a wide variety of subsurface data associated with hydrocarbon assets, the two teams were able to combine their models and visualize the two wells together.

By integrating the various datasets that modeled each field, CoViz 4D enabled the teams to evaluate the two fields as a single entity, including locations of injection wells, well completions, geologic formations, CO2 injection volumes, and production data. With an opens in a new windowintegrated view of data, reservoir engineers were able to isolate the problem and identify the cause of the anomalous EOR results. A thief zone connecting the two wells allowed CO2 from the poorly performing well to migrate to the over-performing well. The ability to view the combined well data revealed the reason for the anomaly that otherwise would have eluded the teams acting independently.

While the above example solved a perplexing problem, CoViz 4D has even broader applicability in helping reservoir teams manage enhanced oil recovery activities. It can incorporate data from temperature observation (TO) wells to show the extent of the steam chest, allowing reservoir and production engineers to monitor the progress of their enhanced oil recovery methods.
CoViz 4D can also integrate time-series data associated with seismic studies, reservoir simulation grids, well status, or production data. By opens in a new windowanimating these data over time, reservoir engineers can more clearly understand the interdependencies of these factors and their effect on enhanced oil recovery results.
Visually explore recovery strategies and the interaction among wells. 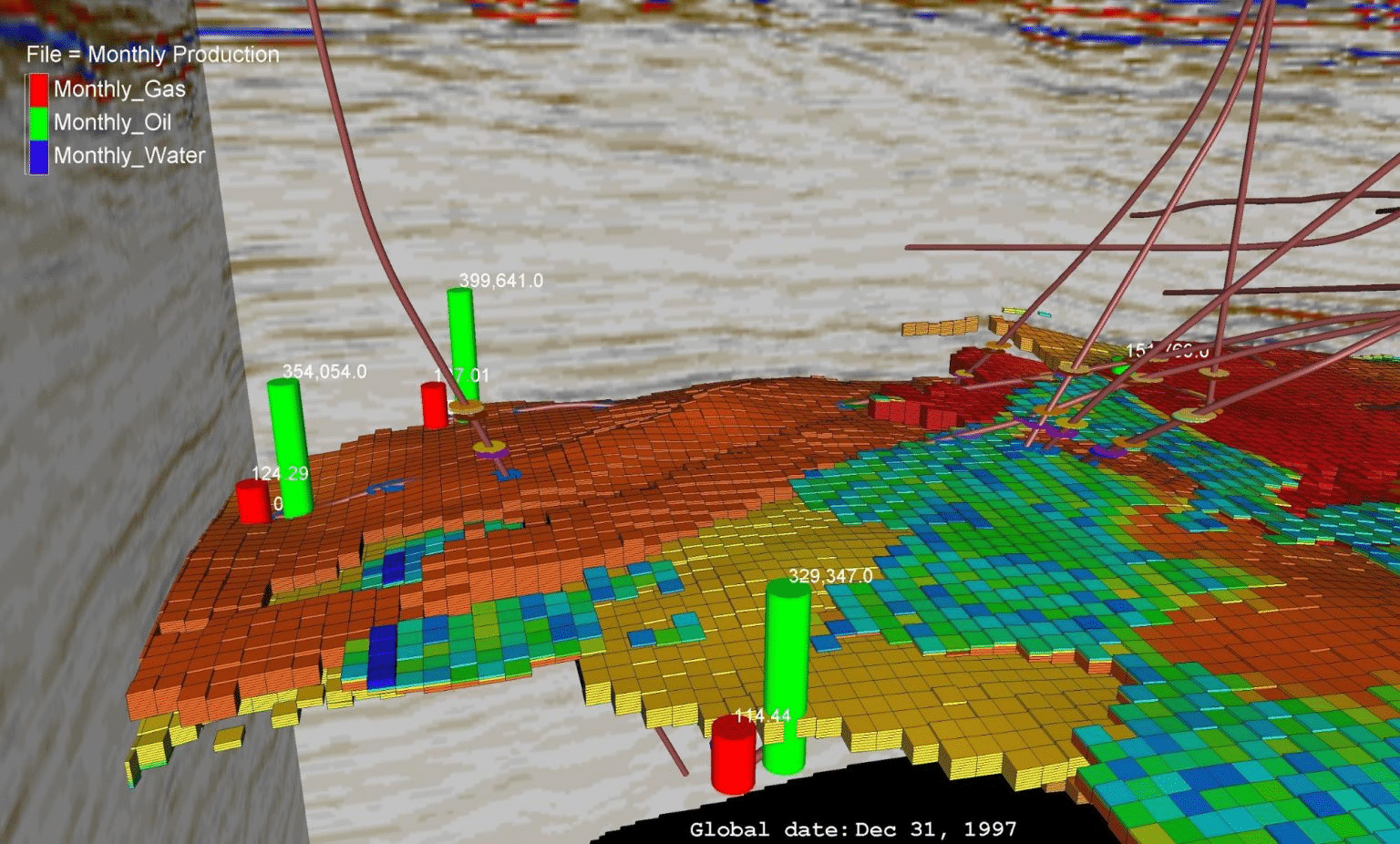 Visually explore recovery strategies and the interaction among wells.

A data registry is one of the key components of CoViz 4D’s ability to integrate a wide range of data sources. Seismic studies, geologic models, reservoir simulations, well plans, and many other datasets produced by discipline-specific software from vendors like Schlumberger and Halliburton are easily added to the data registry via drag-and-drop. CoViz 4D opens in a new windowautomatically handles the various data formats and presents the data in a common viewing environment. Without needing to know where the data originated or how to use the specific software that created it, individual members of the reservoir team obtain a more detailed understanding of the reservoir performance and the factors that influence it.

In the case of enhanced oil recovery, access to all the relevant data provides an unprecedented ability for reservoir teams to evaluate the feasibility of EOR, determine the best recovery method, and monitor results. Combining and visualizing a wide range of reservoir data enables reservoir teams to:
For operators who have exhausted primary and secondary recovery methods, yet still have significant reserves, CoViz 4D can be an essential tool for optimizing the planning, implementation, and management of enhanced oil recovery activities.

Modeling and tracking water injection is a critical aspect of regulatory compliance.Asset teams understand why regulatory compliance in the oil and gas industry is crucial to successful business operation and yet, many companies find themselves on the wrong end of...
Read More

The demand for environmental and economic sustainability has encouraged industries to approach new techniques of energy development. The hydrocarbon sector is increasingly looking at the mature and depleted oil fields that meet the temperature requirement for any...
Read More

The Importance of Integrated Reservoir Characterization in Geologic Modelling