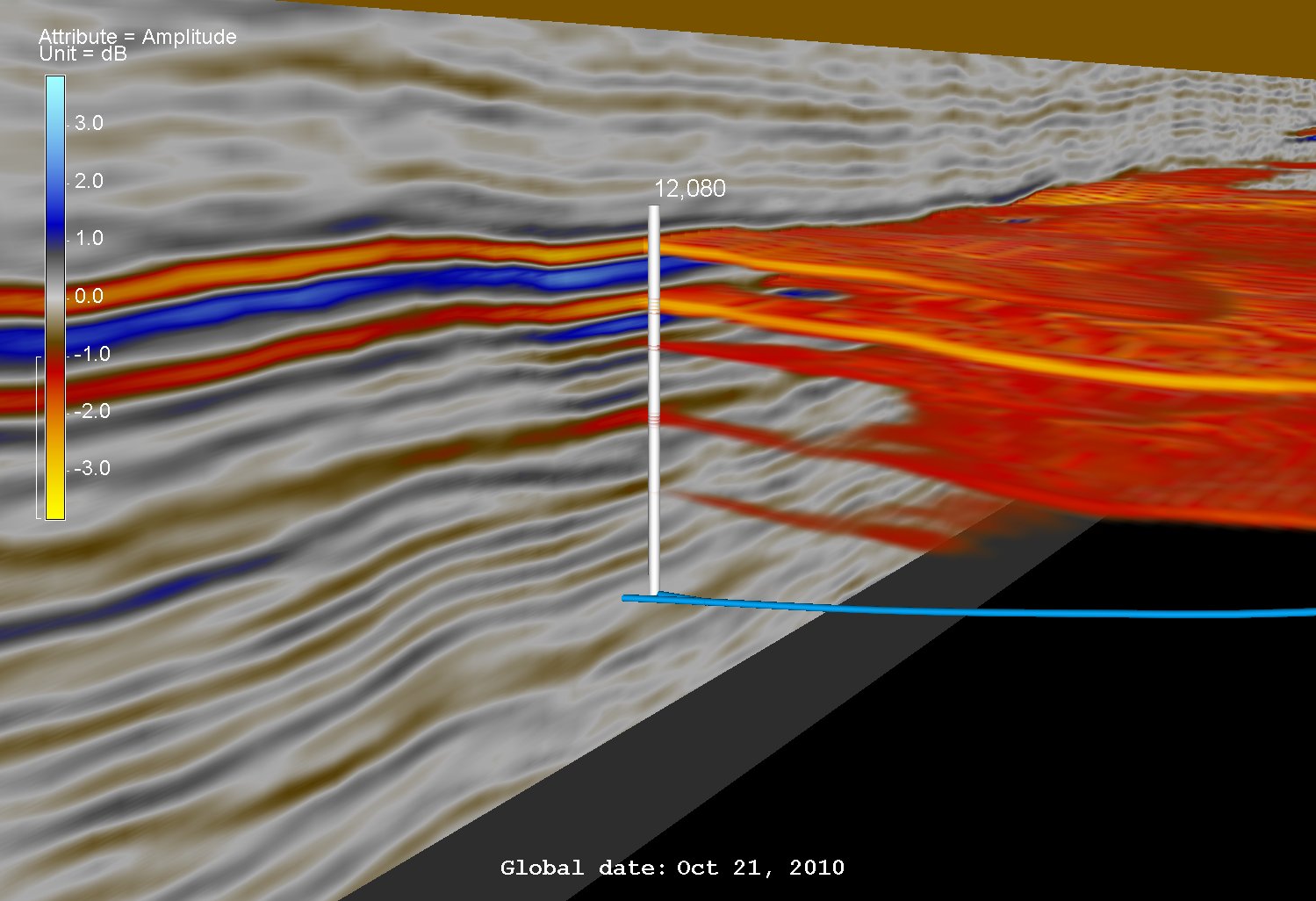 The above CoViz 4D image, taken at the 2010 timestep, depicts the CO2 plume (orange) in various layers of the Utsira Formation sliced open against a north-south seismic cross section, at the injection point along well 15/9-A16 (blue tube). The white vertical tower indicates the CO2 injection of 12K million tons at the 2010 timepoint. Behind the seismic cross section is the RESCUE export of the Roxar RMS model. The Sleipner CO2 Reference Dataset is courtesy of The Sleipner Group (Equinor Energy AS, ExxonMobil E&P Norway, AS LOTOS E&P Norge AS, and KUFPEC Norway AS).

With the increasing understanding of global warming and its causes, industries are looking for ways of reducing CO2 from entering the atmosphere to adhere to net zero goals. Subsurface CO injection and storage has been seen as a potential solution for many years for capturing the CO2 emitted from oil and gas production along with heavy industrial sources. Oil and gas reservoirs can provide ideal storage for injected CO2. However, the monitoring of the injection process in the reservoir is extremely important to ensure there is no leakage and unexpected movement of the CO2 post injection.

For years, oil and gas companies have used different softwares for predicting and monitoring production and injection regimes to enhance the recovery from the reservoir. Reservoir engineers can use similar tools to monitor the carbon injection and visualize stored CO2 in the reservoir for safe operation during and after injection.

Successful CO2 injection and storage require a detailed evaluation of the risk associated with the process. Leakage of the injected CO2 is one of the primary public safety concerns. The investigation of geoscientific metrics of the subsurface, especially the rock formation, faults and fractures, porosity, pressure and permeability determines the suitability of the CO2 injection process. Fault location indicates a potential leak path for injected CO2. Appropriate evaluation can help identify these locations and geological orientations which can be useful in developing alternate injection strategies along such paths in case of unexpected leaks.

The containment of injected CO2 is the primary goal of the storage process. With reservoir modeling of the various reservoir data, asset teams can not only access the geological details, such as structural caps and depositional layers but also determine the stress variation, pressure limit, and spill point of the reservoir. This insight into reservoir characteristics can help reservoir engineers to develop a documented, sustainable CO2 storage plan.

Monitoring subsurface CO2 storage involves measuring time-varying rates of injection into the reservoir, pressure changes, and fill volume. The potential volume of CO2 injected is dependent upon the geology of the reservoir. Visualizing this injected volume over time can lead to an invaluable understanding of CO2 movement and ensures the optimization of the injection and storage process. Furthermore, generating and visualizing predictive models alongside observed data is beneficial in ensuring reservoir behavior is as expected.

The visualization of CO2 volume over time in the subsurface allows asset teams to do the following:

CoViz 4D integrates available data to present the history and current state of the reservoir, and can be used to visualize the future predictive reservoir model. Geologic data, injection data ad time lapse seismic data can be integrated into a common environment for improved collaboration and understanding. With these tools, the migration of CO2 through the reservoir can be monitored over time. The monitoring of CO2 injection volume and pressure in context with the geological trap configuration or volume could reduce the over-pressurization risk and help to ensure safe CO2 storage.

By monitoring subsurface CO2 storage over time, asset teams can evaluate and track the injection and storage process and take necessary measures to avoid the risk of leakage. With an enhanced process of monitoring and 3D/4D visualization of subsurface CO2 storage reservoirs, asset teams can develop plans to ensure safe carbon storage and minimize the environmental risks.

The Importance of Vendor Neutrality in Data Fusion Software

For oil and gas industry professionals looking to interpret data and understand the big picture, they must turn to data fusion software. No single software product serves all the needs of those involved in the exploration, development, and recovery of hydrocarbon...
Read More

With the increase in drilling activities on a global scale, the complexity of managing drilling operations in oil fields is becoming increasingly complex. The knowledge on the exact geospatial location of existing horizontal and directional wellbores has thus become...
Read More

Integrating subsurface data from existing vertical wells can greatly assist targeting and placement of infill horizontal wellbores. CoViz 4D enables a high degree of data integration and collaboration across the asset and adds value to analysis and...
Read More

Understanding the Role of Data Integration in Enhanced Oil Recovery

EOR operations are complex, as depicted in this photo of a steam injection operation. Communication between team members and other teams is critical to understanding and managing EOR activities. CoViz 4D provides a highly integrated environment for data sharing and...
Read More