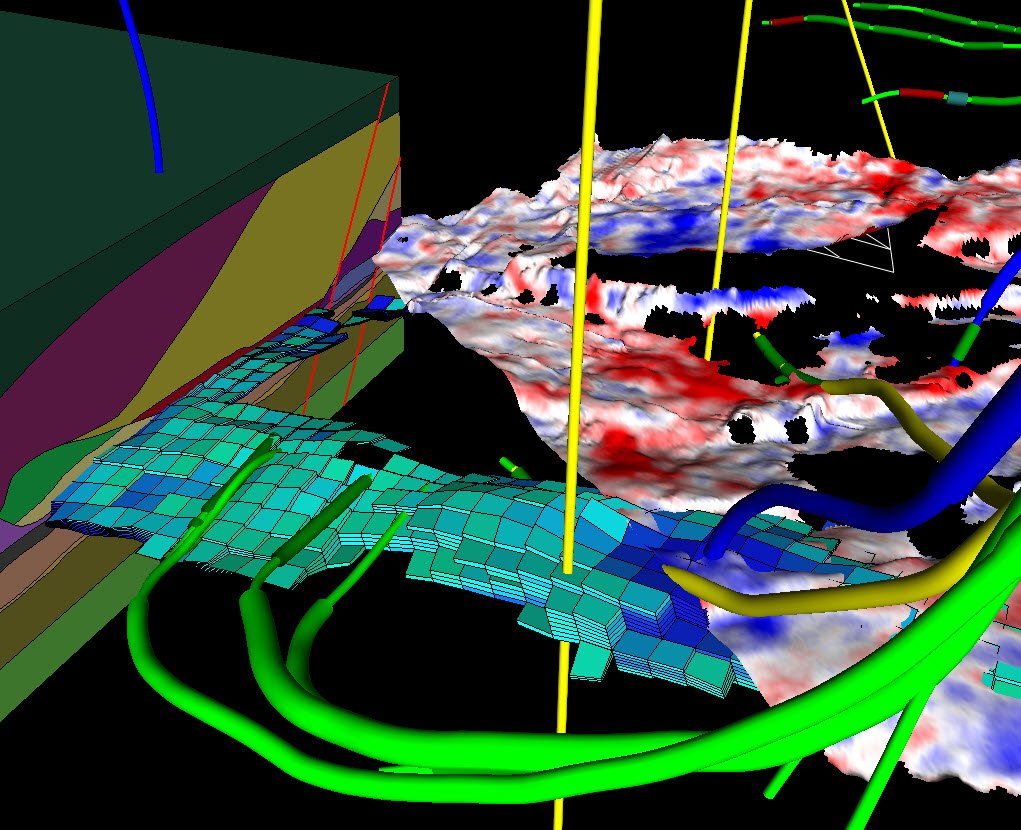 Analyzing temporal amplitude differences on a horizon-by-horizon basis in conjunction with reservoir simulation, geologic structure, wellbore proximity, and completions is a strong point of CoViz 4D.

The characterization of subsurface conditions is vital when it comes to oil field production optimization. Production from a reservoir changes the initial relative volumes and saturations of oil, gas, and water contained within that reservoir. To make the best decisions during operations, analysts need clear visuals that can highlight these subsurface changes and superb analytic software that tracks the variations. The ability to visualize data in 4D plays a crucial role, as it allows analysts to understand how subsurface conditions within a reservoir have changed over time.

The Role of Data Integration in Reservoir Characterization

Four-dimensional seismic data is more useful when integrated with supporting data streams that further enlighten analysts on reservoir conditions, enhancing the decision-making process. All too often, the incorporation of different datasets into flow models is a difficult task. Often, analysts must contend with unsupported data formats that are not easily assimilated into a single viewing hub, complicating the analytical process as users struggle to piece together the datasets.
The multidisciplinary function of CoViz 4D—an integrated software solution—incorporates disparate data streams into a prime viewing interface, condensing the data in a digestible viewing form for each teammate to understand easily, regardless of their field of expertise. CoViz 4D allows engineering departments to assess subsurface seismic data that was previously analyzed by geoscience departments. It brings different teams together so each member can better understand subsurface conditions—forming creative solutions to some of the toughest challenges in oil field production optimization.

Regardless of the datasets, 4D functionality is one of the most important features when analyzing subsurface profiles. The 4D seismic acquisition scheme captures the variations in seismic attributes and can be matched with reservoir models and fluid production within various wells. With the integrated data, users can get a calibration of fluid/gas saturations relative to seismic attributes.

With 4D analysis, analysts will also have the ability to:

The combination of cross-plotting and quantitative analysis fosters a detailed understanding of subsurface conditions, allowing for adjustments to simulations for improved accuracy. The 4D seismic data buffers predictions and simulation models via seismic history matches, enhancing flow models and reducing uncertainty through the comparison of pressure and fluid variations stemming from time-lapse seismic data. The enhanced features foster a wider understanding that leads to better reservoir management decisions.

Microseismic events plotted along with the reservoir grid with production and seismic data for context. By combining these data, CoViz 4D can aid in the understanding of reservoir heterogeneity and fracture systems.Microseismic monitoring is helping reservoir...
Read More

4D seismic together with reservoir simulation results are a powerful tool in optimizing production over the life of an oilfield.Engineers and geoscientists know more than anyone about the challenges associated with complex reservoir characterization, especially in...
Read More

Reservoir Characterization and Modeling: The Role of 4D Seismic in Visualization and Analysis

4D seismic together with reservoir simulation results are a powerful tool in optimizing production over the life of an oilfield.The hydrocarbon reservoir at the time of discovery is the product of a seismic survey and a collection of appraisal wells. Use of various...
Read More

Co-visualization of reservoir simulation, wellbore placement, fluid production and interpreted seismic is a powerful tool for asset teams.Engineers and geoscientists in the oil and gas industry benefit from data visualization and analysis tools that merge complex...
Read More

Integrating subsurface data from existing vertical wells can greatly assist targeting and placement of infill horizontal wellbores. CoViz 4D enables a high degree of data integration and collaboration across the asset and adds value to analysis and...
Read More