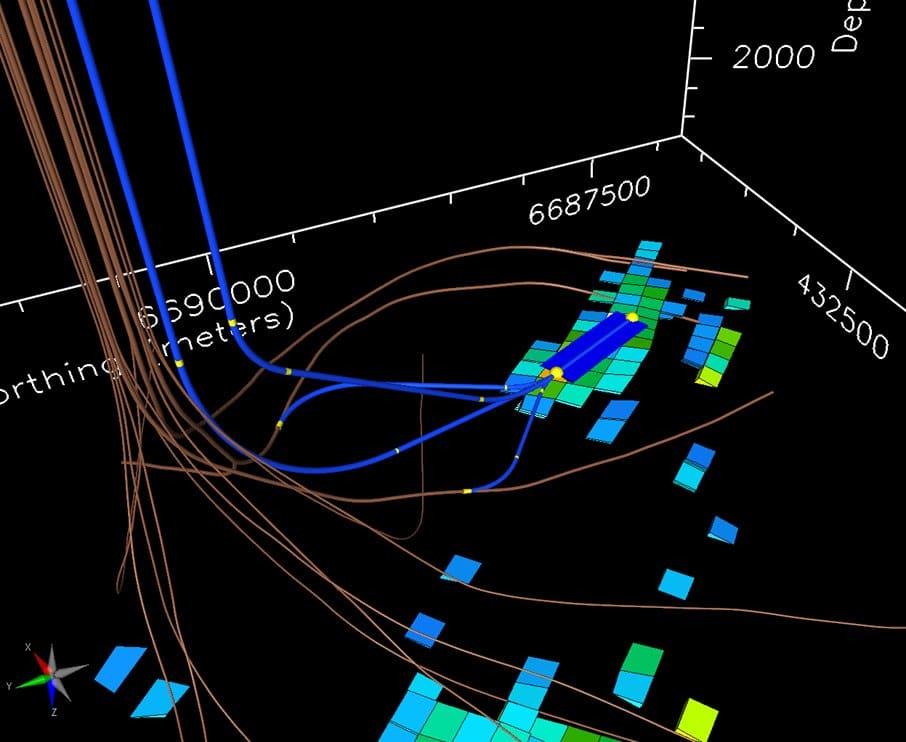 Evaluating well plans and drilling scenarios is a critical on-going activity that demands constant attention for safety and economic reasons. Visualizing and analyzing well data in a geolocated, temporal environment such as CoViz 4D is paramount to maximizing efficiency during drilling and well management operations.
Oilfield well control procedures commonly include plans for containing oil kicks, but it would be ideal if teams could prevent them in the first place; this is why analysts need a way to analyze subsurface profiles. According to opens in a new windowThe Center for Public Integrity, more than 1,500 workers died in the process of extracting oil between 2008 and 2018—underscoring the dangers of reservoir exploration and well management. Even though oilfield dangers are an ever-present threat, analysts may be able to spot red flags early by using software capable of multidisciplinary data analysis.
In particular, data visualization software can assemble historical data from reservoir models, offset wells, and seismic data and merge them into a central viewing system that assists analysts in their evaluation. The ability to visualize these datasets in one environment provides greater insight into well-control strategies that can be designed to help teams avoid dangers such as oil kicks. Co-visualization software can be used to enhance the pre-drilling process by highlighting the anticipated reservoir characteristics along the planned well trajectory.

Historical well data from an oilfield are often diverse and gathered in large volumes. A broader picture of the reservoir characteristics is defined by seismic data, geological models and reservoir simulation models. CoViz 4D can use these diverse data streams to form a cohesive big picture of the reservoir characteristics along the well trajectory which is accessible to team members across varying disciplines. Using the assembled data, the system can create a geospatial model of the reservoir and geological compositions where the well will be drilled. From there, analysts can assess reservoir conditions by visualizing wellbore track issues in conjunction with existing data that highlights geologic and reservoir makeups, giving users a better sense into the opens in a new windowsubsurface conditions.
Users can study the wellbore tracks and search for hazards that may hamper the drilling process—allowing planners to implement the necessary corrections beforehand. The ability to opens in a new windoworganize large volumes of data in one central viewing system leads to better management decisions that secure a safer atmosphere and establish efficient wells to maximize hydrocarbon extraction.

With CoViz 4D—data visualization and analysis software created by Dynamic Graphics, Inc. (DGI)—users can take advantage of the following features that can be used to streamline the well-planning process:
CoViz 4D is also useful opens in a new windowduring drilling operations, as other datasets in the form of mud logs or MWD logs can be placed in the system and assessed in near-real-time with new and existing data. The monitoring of changing conditions is another pertinent attribute, as operators must follow daily drilling data that may reveal sudden shifts within a geologic or reservoir framing. This strategy allows operators to make quick decisions that can address unplanned variations before they morph into complications.
For example, the system can read irregular pressure in the wellbore that may lead to an oil kick. After detecting the fluke, a team can determine alternative solutions that can bring pressure to normal levels and maintain continued operations without further delay. If an oil kick occurs, analysts can also get a crisp rendition of problematic areas and know where to implement safety barriers that can contain the crisis and bring operations back online sooner rather than later.

WellArchitect, DGI’s advanced well planning software solution for integrated planning and drilling of directional wellpaths, leverages the detailed insight provided by CoViz 4D to enable well planners and drilling engineers to improve wellbore placement. Using WellArchitect to plan within the geologic context and subsurface detail provided by CoViz 4D, allows for opens in a new windowquicker planning and better optimized well plans; during drilling, it can result in faster responses to unexpected situations. With a over 15 years of use in the field, in thousands of copies worldwide, WellArchitect has been developed to include but also go beyond more traditional tools; WellArchitect can, for example:
WellArchitect combines powerful directional drilling software with advanced 3D visualization capabilities to help well planners to optimally place wellbores in new fields or successfully navigate the subsurface complexity associated with multi-site⁄multi-lateral wellpaths. Through these detailed depictions, analysts stand a better chance of seeing abnormalities that may cause hiccups during the operational phase.

CoViz 4D can expose potential problems at the subsurface level, giving analysts more time to determine the proper strategies that will overcome the obstacles. It can read pressure or fluid data to ensure that opens in a new windowsudden inconsistencies are mitigated to avoid oil kicks. CoViz 4D can also augment well-control strategies by using an amalgamation of multidisciplinary data and forming them into a realistic portrayal of subsurface conditions.

With CoViz 4D, analysts can also simplify oilfield well control procedures in the event of an emergency, providing more time to craft viable plans that minimize losses. And, the integration of different data streams fosters collaboration between geoscience and engineering departments, helping team members, together, solve some of the toughest challenges associated with well-planning and control. As a result, energy companies can drill wells in the best locales and help maximize hydrocarbon extraction.

CoViz 4D, a data visualization software from Dynamic Graphics, Inc., offers multidisciplinary features that combine datasets and translate them into central visual displays. Users will be able to visualize subsurface conditions and mitigate risks that could stall operational goals. Contact our team today to learn how you can enhance your well-control strategies and foster an efficient well-planning regimen that allows you to make the best decisions before operations begin.

Co-visualization of reservoir simulation, wellbore placement, fluid production and interpreted seismic is a powerful tool for asset teams.Engineers and geoscientists in the oil and gas industry benefit from data visualization and analysis tools that merge complex...
Read More

3 Oil and Gas Technology Trends That Are Improving the Industry

Completions in HPHT environments are challenging and costly. 3D visualization and analysis of reservoir conditions and characteristics, along with offset well data, can significantly increase safety and success rates. Data used with permission by the...
Read More

Well Stimulation: The Importance of Data Visualization and Analysis

Visualization and analysis of well stimulation data such as fracking operations are vital to enhancing well productivity and enabling a faster return on investment.Well stimulation is a highly technical and precise solution to decreased reservoir flow and production...
Read More

Steam-assisted gravity drainage (SAGD) methods have proven their effectiveness in economic oil recovery in Alberta and California, frequently achieving a 60% recovery factor. The placement of horizontal laterals within a field and the vertical separation of well pairs...
Read More