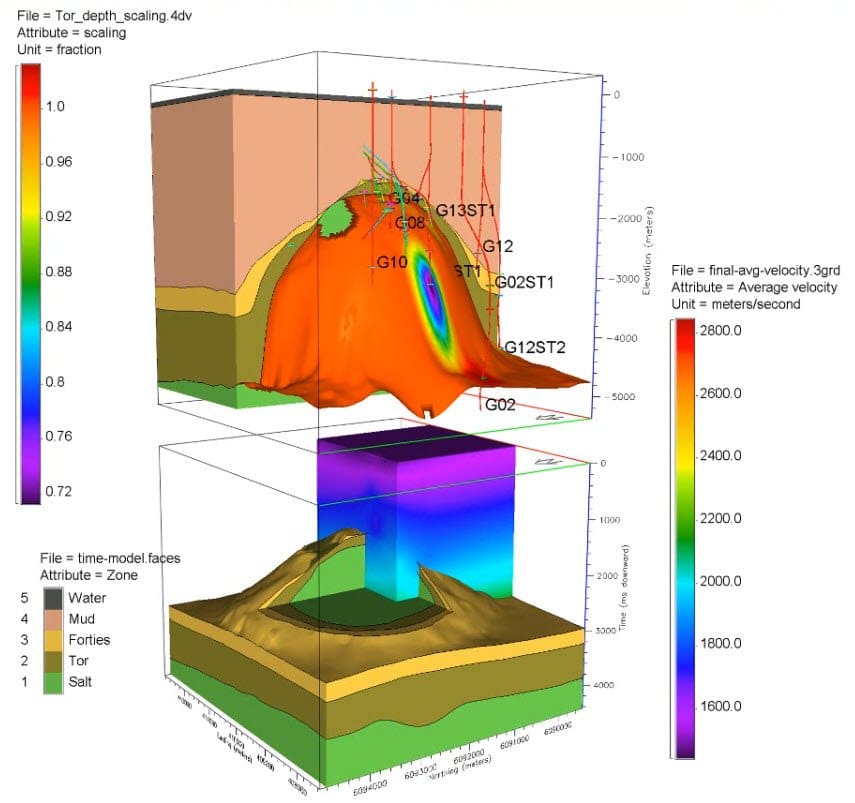 This display from CoViz 4D shows the depth scaled velocity model using well control and the sliced structural depth model in the upper part of the image. The seismic time model along with the average velocity cube used to correct well control is shown below.

While there are traditional approaches to the structural interpretation of seismic data for oil exploration and velocity modeling in the industry, these approaches can be enhanced through opens in a new windowadvancements in technology. Without the ability to integrate and visualize all relevant data in a comprehensive environment, professionals may overlook valuable pays.

Geoscientists can benefit from rapid updates to velocity models to include the latest information. This will enhance the details of the subsurface and improve the accuracy at which depth surfaces are produced. More accurate depth surfaces will enable better volumetrics and reservoir management at the same time reducing risk and depth uncertainty.

Velocity modeling is highly dependent upon input from geological and petrophysical data and interpretations. Often this data can be incorporated in more traditional velocity modeling software. CoViz 4D—data visualization and analysis software created by Dynamic Graphics, Inc. (DGI)—offers a unique addition to the process with its iterative nature of correcting the velocities on a zone by zone basis by incorporating the geologic well picks into the velocity model. At each well location the residual error between the real well pick and the depth converted surface can be assessed and corrected. Any deviations can be easily seen in CoViz 4D and will be adjusted automatically by the process to provide a calibrated velocity model.
As more wells are drilled it is imperative that the velocity model and its constituent parts are kept current. Geoscientists can use this latest information to update interpreted horizons and review well plans and reservoir economics. The added precision and depth uncertainty assessments will greatly aid the process of drilling development wells in a naturally very uncertain environment, reducing risk and costs in the process.
Additionally, CoViz 4D provides an efficient workflow to calculate velocity volumes relative to seismic picks. As a result, users will get an average velocity volume that adjusts to the picks, fostering more accurate time-to-depth conversions, in addition to reservoir volumes and seismic models.
CoViz 4D enhances traditional velocity modeling by allowing users to:
A prime visualization scheme allows for a more thorough opens in a new windowunderstanding of complicated reservoir conditions with the integration of fault geometries and unit thickness variations. Further, the cross-plotting of quantitative data can be created and connected within the confines of a 3D/4D visualization package such as CoViz 4D. These cross-plotting and data integration benefits can be assessed with the velocity models, giving users greater insight into the integrity of the resulting calibrated velocity mode.

When leveraging the velocity modeling module within CoViz 4D, users can create an unfaulted structure model from interpretive time horizons, reviewing results during each stage. The structural models outline the zones in which instantaneous velocity or interval velocities receive inputs, and the zones can have seismic velocity volumes, velocity constants, and velocity trends that can be rendered in a mathematical expression. All zones can also be specified, or the seismic volume can be made to cover a wide array of zones.
Then, users can achieve an average velocity domain within the time domain, derived from instantaneous parameters, giving analysts the ability to depth convert the time horizons contained within the structure model, providing the depth model. After, analysts will get a repeated process that takes into account each depth-converted surface to calculate a scaling view, stemming from the layering residuals. The scaling factors undergo a gridding process and are fed back to the instantaneous velocity model, adjusting the velocity that was used to depth convert the layering.
The new average velocity volume is produced with every iteration, with all layers and zones processed, providing a corrected velocity volume within the well. After the process, the average velocity volume has been adjusted accordingly to reflect the seismic picks, with the workflow outputs reflecting the following:
The velocity model function is accessible using a velocity modeling tab in the drop-down menu of CoViz 4D. Users can also create a new velocity project and choose from three types of velocity: average velocity, interval velocity, or Z2D calibration.

The cross-correlation and integration of geologic and petrophysical data into the velocity model will aid professionals opens in a new windowduring structural interpretation of seismic data for oil exploration. The well data provided can be viewed with added clarity in a velocity modeling regimen provided by CoViz 4D, enhancing the overall clarity of the structural interpretation.

CoViz 4D can create depth calibrated velocity volumes coupled with ancillary products such as depth uncertainty and well drop out analysis. Such products provide integrity to the velocity volumes generated allowing management to plan with confidence new wells and renewed assurance of the reservoir’s reserves. With CoViz 4D, asset teams can integrate all relevant data to obtain a comprehensive view and analysis of a field, lessening the chance for data misinterpretation and missed vital pays that could have contributed to production goals.

CoViz 4D, a data integration software created by Dynamic Graphics, Inc., offers a velocity modeling function that can help users during the structural interpretation of seismic data for oil exploration. CoViz 4D’s unique ability to incorporate petrophysical and geological data in a velocity model greatly enhances interpretation. Contact our team today to learn more about CoViz 4D and how its data integration functions can improve workflows and foster a wider understanding of subsurface conditions.

The above image in CoViz 4D depicts a seismic horizon and velocity model in the time domain (top) and the same horizon, depth converted, along with the depth converted seismic cube, wellbores and horizon picks in the depth domain (bottom). Data used with the...
Read More

The Life Cycle of an Oil Field: Improving Expectations

A mature North Sea field showing a small subset of geologic and engineering data that must be integrated and analyzed to understand changing reservoir conditions during field development. Data used with permission of the owner.The life cycle of a typical oil field...
Read More

4D Seismic Data Visualization: Why the 4th Dimension Is Just As Important As the Other Three

One seismic cube out of a time-lapse series shown with the velocity cube, different geologic models, reservoir simulation grid, production data, and well paths, completions and logs. Putting all this 3D and 4D data into a single environment provides a coherent history...
Read More

Gamma ray logs for multiple wells drilled into a sand body (semi-transparent orange) with seismic amplitude shown.  Data used by permission of owner.Accurate analysis of geological and geophysical data is the basis for understanding reservoir characteristics in oil...
Read More

Oil Well Completion: The Importance of Data Visualization and Analysis

How to Improve Hydraulic Fracturing With Data Visualization & Analysis

Visualizing and analyzing microseismic data during fracture stages can help to improve the fracturing process and improve expected hydrocarbon recovery.Achieving more optimum, cost-effective recovery from unconventional reservoirs—particularly at a time when...
Read More